[55] The Greater Meanings of the Crucifixion Scene 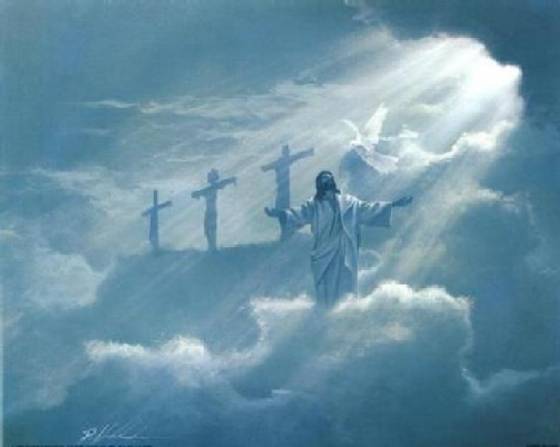 39 But one of the hung evildoers began to say abusively to him: You are the Christ, are you not? Save yourself and us.
40 In reply the other rebuked him and said: Do you not fear God at all, now that you are in the same judgment? [literally all 3 are condemned to death by Pilate. Symbolically, they all 3 enter the first death and they all 3 eventually get resurrected and saved and they all 3 eventually get everlasting life and become Gods as Jesus has. This goes way beyond paradise!]
41 And we, indeed, justly so, for we are receiving in full what we deserve for things we did; but this [man] did nothing out of the way.
42 And he went on to say: Jesus, remember me when you get into your kingdom.
43 And he said to him: Truly I tell you today, You will be with me in Paradise (Luke 23).

What really is this stage managed crucifixion scene as worded in Luke saying to mankind? And what are these two bit part actors doing at the climax of our salvation? Why did God permit them into his son's big scene? How did they manage to get almost equal billing with the Christ in the poster campaign for all Christianity?

So the crucifixion scene represents all of mankind together with their saviour split into the sheep on the one hand and the goats on the other. But interestingly for the more technically minded reader, there is no stated handedness here. We do not know which evildoer was on which side of the Christ.

Note that at no time did Jesus ask either of the condemned sinners: What capital sin did you commit my dear fellow? The sin, however large, and in both cases judged to be a capital sin by the Roman state, was irrelevant to salvation. The two men did not differ at all in sin, they differed only in faith.

But there is much more here. For instance, no man goes into everlasting cutting off - because even the abusive evildoer dies at the side of Jesus - which is telling us that he is also saved by Jesus' blood eventually. (The Greek word is aiwnion in the parable of the sheep sand the goats in Matthew 25 means age-long). So the crucifixion scene is telling us Jesus' sacrifice saves all of mankind even the abusive sinners. But not all of us will be with him in paradise.

The crucial realisation here is that the abusive sinner, who represents those who go to hell, was no farther away from Jesus' blood than the faithful sinner who represents those who go into the paradise. So the eventual salvation of the faithless sinner is just as secure as it is for the faithful sinner. For more on Hell and universal salvation see intro14.

Furthermore since Jesus, the faithful sinner and the abusive sinner are all in the same judgement (verse 40). So they are all resurrected, they all get everlasting life, and they all become Gods eventually. And all of this is through the blood of Jesus (actually of his everlasting angelic body). This is because God loves the abusive sinner as much as he loves his firstborn son Jesus Christ. And he will not give up on any of us. Just as most human fathers and almost all human mothers will not give up on any of their sons or daughters.

Now we cannot resist the observation that those with faith see the purpose and value of Jesus' death as crucifact. Whereas those without faith see it as crucifiction! The abusive evildoer knew Jesus was going to die but attached no significance to it. The faithful evildoer realized that a kingdom would result from it.

Many LWs in the early days wondered why does this church have such a motley crew as its congregation? The answer is that God is teaching us to love all of our brothers, not just the regular variety.

So yes dear reader, however bad your sin, however abusive your behaviour and however small your faith, God and Jesus love you unbreakably and will save you eventually. Now if you want a lesson in what love is - you have just had it!

With this understanding we can finally see the power of the story of the resurrection of the widow of Nain's son...

11 Closely following this he travelled to a city called Nain, and his disciples and a great crowd were travelling with him.
12 As he got near the gate of the city, why, look! there was a dead man being carried out, the only-begotten son of his mother. Besides, she was a widow. A considerable crowd from the city was also with her.
13 And when the Lord caught sight of her, he was moved with pity for her, and he said to her: Stop weeping.
14 With that he approached and touched the bier, and the bearers stood still, and he said: Young man, I say to you, Get up!
15 And the dead man sat up and started to speak, and he gave him to his mother.
16 Now fear seized them all, and they began to glorify God, saying: A great prophet has been raised up among us, and, God has turned his attention to his people (Luke 7).

The widow had lost her husband and her only begotten son. She therefore had no means of financial support - she was destitute. Jesus looked at her situation, and resurrected her son on the spot. No questions about faith, because her son was a man and was dead. One it tempted to say that the son must have had faith when he was alive or Jesus could not have resurrected him under any salvation covenant. But that might be selling God short (something that all men do all the time). This widow was in the worst possible of predicaments and Jesus had one look and took her straight out of that predicament. It would be better if the boy had had no faith and was just the recipient of unquestioning compassion from Jesus.

So this woman who had lost all of her physical security stands for those who have no spiritual security, no faith. She stands for those who fail every test, who miss every salvation covenant. Those who are not the children of Abraham. It is telling us that God's love is so great that he will save even these. They will have to spend a bit of time in Hell first however! For more on the resurrection of the Widow of Nain's son and on the 3 Stages of adamic death see U913.

The Crucifixion scene in John

17 And, bearing the torture stake for himself, he went out to the so-called Skull Place, which is called Golgotha in Hebrew;
18 and there they impaled him, and 2 other [men] with him, one on this side and one on that, but Jesus in the middle (John 20).

The Crucifixion scenes in Matthew and Mark

In these two gospels Jesus two fellow impalees are referred to as robbers who begin to reproach him. The two in Matthew and the two in Mark together make 4 robbers who pick up their torture stakes as Jesus did. In fact they began as houses of prayer but became caves of robbers. They are the 4 true churches. FDS1 and FDS3 steal the saints from FDS2 and FDS4. FDS4 has a sect in the Watchtower, Laodicea, which has stolen most of its congregation. And presumably FDS2 had a sect in the Roman Catholic Church which stole most of their congregation. These are the power games of Satan with the true churches. What a terrible job we make of serving God! Even when we are staring the glory of God in the face, all we want is money, status, power the glory of men and the glory of women. So great is our desire for glory and so small is our gratitude for salvation.

38 Then 2 robbers were impaled with him, one on his right and one on his left.
39 So the passers by began speaking abusively of him, wagging their heads
40 and saying: Oh you would-be thrower- down of the temple and builder of it in 3 days, save yourself! If you are a son of God, come down off the torture stake!
41 In like manner also the chief priests with the scribes and older men began making fun of him and saying:
42 Others he saved; himself he cannot save! He is King of Israel; let him now come down off the torture stake and we will believe on him.
43 He has put his trust in God; let Him now rescue him if He wants him, for he said, 'I am God's Son.'
44 In the same way even the robbers that were impaled together with him began reproaching him (Matthew 27).

27 Moreover, they impaled 2 robbers with him, one on his right and one on his left.
28 --
29 And those going by would speak abusively to him, wagging their heads and saying: Bah! You would-be thrower-down of the temple and builder of it in 3 days' time,
30 save yourself by coming down off the torture stake.
31 In like manner also the chief priests were making fun among themselves with the scribes and saying: Others he saved; himself he cannot save!
32 Let the Christ the King of Israel now come down off the torture stake, that we may see and believe. Even those impaled together with him were reproaching him (Mark 15).