[27] Satan got an extra 1266 days of authority in the Kingdom of God, because Jesus got 1266 of kingdom powered ministry miracles in Satan's kingdom

1 Now on the 3rd day [after 29Heshvan20, when he left the wilderness] a marriage feast took place in Cana of Galilee, and the mother of Jesus was there. (John 2 NWT)

And Jesus baptised Peter in Holy Spirit turning the water of the 3EC into the wine of the 1NC on the same day that he turned the water into wine at Cana. which was at the end of the wedding feast from 29Heshvan23-29Heshvan29. For the director of the feast said...

9 When, now, the director of the feast tasted the water that had been turned into wine but did not know what its source was, although those ministering who had drawn out the water knew, the director of the feast called the bridegroom
10 and said to him: Every other man puts out the fine wine first, and when people are intoxicated, the inferior. You have reserved the fine wine until now.
11 Jesus performed this in Cana of Galilee as [the] beginning of his signs, and he made his glory manifest; and his disciples put their faith in him. (John 2 NWT)

As a result of this Kingdom power swap, the authority that Jesus should have had on 2011Iyyar14 or 2011Iyyar18 (2nd 1NC first fruits), was delayed until 2014Heshvan20, the end of the miracle ministry payback period. Then it was delayed by the war or Revelation 7 between Michael and his angels and Satan and his angels. This is one reason why the Kingdom came without any observability - see U109..

Incidentally, the length of his ministry from his installation to feed the 1NCs on 29Heshvan21 (the 2NC Pentecost, precisely 30 years after his birth) to his ascension on 33Iyyar25 (40 days inclusively from his appearance to 'the 11'excluding Thomas, on 33Nisan16, before his first ascension from Bethany in Judea of Luke24 on 33Nisan16/17) was 1265 days.

This raises the following question...

1 Then he called the 12 together and gave them power and authority over all the demons and to cure sicknesses.
2 And so he sent them forth to preach the kingdom of God and to heal (Luke 9),

1 After these things the Lord designated 70 others and sent them forth by twos in advance of him into every city and place to which he himself was going to come (Luke 10).

17 Then the 70 returned with joy, saying: Lord, even the demons are made subject to us by the use of your name.
18 At that he said to them: I began to behold Satan already fallen like lightning from heaven.
19 Look! I have given you the authority to trample underfoot serpents and scorpions, and over all the power of the enemy, and nothing will by any means do you hurt.
20 Nevertheless, do not rejoice over this, that the spirits are made subject to you, but rejoice because your names have been inscribed in the heavens (Luke 10).

14 And he formed [a group of] 12, whom he also named apostles, that they might continue with him and that he might send them out to preach
15 and to have authority to expel the demons (Mark 3)

5 These 12 Jesus sent forth, giving them these orders: Do not go off into the road of the nations, and do not enter into a Samaritan city;
6 but, instead, go continually to the lost sheep of the house of Israel.
7 As you go, preach, saying, 'The kingdom of the heavens has drawn near.'
8 Cure sick people, raise up dead persons, make lepers clean, expel demons. You received free, give free [a statement about future gifts. None of these things could be done until the end of the Alienation Times at the Pentecost on 33Sivan5] (Matthew 10).

The 70 are not said to have had authority to expel demons. In fact no son of Adam expelled any demon prior to 33Sivan5. The only account in the Gospels which mentions the disciples attempting to expel a demon was a failure...

28 So after he entered into a house his disciples proceeded to ask him privately: Why could we not expel it?
29 And he said to them: This kind cannot get out by anything except by prayer. (Mark 9 NWT)

A prayer which God could not answer for sons of Adam during the Alienation Times. Surely they had power over demons. But not as far as expelling them. Indeed so long as the demons respected the power of the apostles, they could remain in possession.

These things prefigure the kingdom power that was borrowed from the 1266 days of kingdom authority. Now in this period people would have had the powers seen in Jesus' ministry. The Alienation Times prohibited the use of the gifts of the spirit by adamic men until 33Sivan5 (but Jesus was non adamic). This is why the gifts of the spirit were poured out onto the apostles on that day. The 70 sent out had authority from Jesus but were not able or said to actually expel any demons until that authority could be used at Pentecost.

Jesus was here from 29Tishri10, his baptism ,until 33Iyyar25, his ascension at the end of the 40 days of Acts1 from his earthly resurrection on 33Nisan16. A period of 1305 days compared, But it took him 30 days to descend down Jacob's ladder so he left heaven on 29Elul10. So the entire length of his heavenly expedition was the 1335 days of Daniel12.
Also there were 1290 days of Daniel12 from 29Elul10, when he left heaven, to 33Nisan10 when the sheep entered into the house of the Passover.

18 He said but to them I was beholding the Satan as lightning [astraph] out of the heaven having fallen [Satan is responsible for the fire from the heavens of the 2nd and 3rd fire signs, which prove that he is down here] (Luke 10)

Lightening starts with leaders coming out of charged clouds. These travel around 50% of the way to the earth and then start attracting Streamers up from the ground towards them. When a rising streamer meets a descending leader then the lightning flash occurs. Here is an animated gif of the mechanics of a lightning strike from wikipedia.

So the leaders are the descending demons and the streamers are the humans who are about to be possessed. All of whom must be born again and have a 2nd dead associated angel either from the DAC or from having failed a spirit baptism test. The humans go to sleep in their 2nd dead angel in Hades. They do not go to Gehenna because that would be a kingdom manifestation and they can still be saved on faith after the demon is expelled..

The demons always demand and get the same capabilities as the angels. God ensures a level playing field.

Only the Jews were possessed during Jesus' ministry (the daughter of the SyroPhoenician woman must have had a Jewish father who owned her). This was because only the Jews were called to be saints at that time *and so had associated angels).
Likewise at the end only the Christians will be possessed because only they are called to be saints. Satan can pick anybody to be a son of the DAC however (a weed - see U70).

Paul was not baptised during Jesus' ministry. So although he was given great gifts of the spirit by the laying on of the hands of one of the apostles, he was never himself able to give those powers to anyone else.

Jesus ministry was, in authority, 3½ years of the kingdom of God.

Now Satan and the demons also got an extra 1266 days in heaven from 2011Iyyar14 to 2014Heshvan20. So he must lose 1266 days in heaven during Jesus' ministry. That is why Satan was down here possessing Judas during Jesus' ministry and why Jesus spent half his ministry expelling demons! So forced demon possession began on 29Heshvan20, when Satan was testing Jesus in the wilderness! (Satan was down here 9 days in advance of the first miracle and left us when he committed suicide in Judas. Jesus started expelling them on the first Sabbath of the Galilean ministry which cannot have been 29Heshvan27 and so must have been 29Chislev4...

13 So he continued in the wilderness 40 days [29Tishri10-29Heshvan19, and 29Heshvan20, the final testing], being tempted by Satan, and he was with the wild beasts, but the angels were ministering to him.
14 Now after John was put under arrest Jesus went into Galilee, preaching the good news of God
15 and saying: The appointed time has been fulfilled, and the kingdom of God has drawn near. Be repentant, you people, and have faith in the good news.
16 While walking alongside the sea of Galilee he saw Simon and Andrew the brother of Simon casting [their nets] about in the sea, for they were fishers.
17 So Jesus said to them: Come after me, and I shall cause you to become fishers of men.
18 And at once they abandoned their nets and followed him.
19 And after going a little farther he saw James the [son] of Zebedee and John his brother, in fact, while they were in their boat mending their nets;
20 and without delay he called them. In turn they left their father Zebedee in the boat with the hired men and went off after him.
21 And they went their way into Capernaum. No sooner was it the Sabbath than he entered into the synagogue and began to teach.
22 And they became astounded at his way of teaching, for there he was teaching them as one having authority, and not as the scribes.
23 Also, at that immediate time there was in their synagogue a man under the power of an unclean spirit, and he shouted,
24 saying: What have we to do with you, Jesus you Nazarene? Did you come to destroy us? I know exactly who you are, the Holy One of God.
25 But Jesus rebuked it, saying: Be silent, and come on out of him!
26 And the unclean spirit, after throwing him into a convulsion and yelling at the top of its voice, came on out of him. (Mark 1 NWT)

The entire dragon of Satan was down here possessing Jews or women and children owned by Jewish fathers for the 1266 day ministry ransom period. Now Jesus was sent to minister to the genetic house of Israel only - but Satan was still Caesar to that nation during the ministry. So Satan is able to minister to the genetic house of Israel for 1266 days from heaven in the payback period. This maybe why the world's banking system is largely in the hands of the Jews. However Paul reminds us in the case of the Pharaoh of Egypt that...

17 For the Scripture says to Pharaoh: For this very cause I have let you remain, that in connection with you I may show my power, and that my name may be declared in all the earth. (Romans 9 NWT)

So although Jesus won the heavenly war with Satan. He permitted the dragon a further 42 months of authority from 2017Ab17 to 2020Shebat14, during which God would show the faithful his power and the ones to be saved would see it and understand and learn. 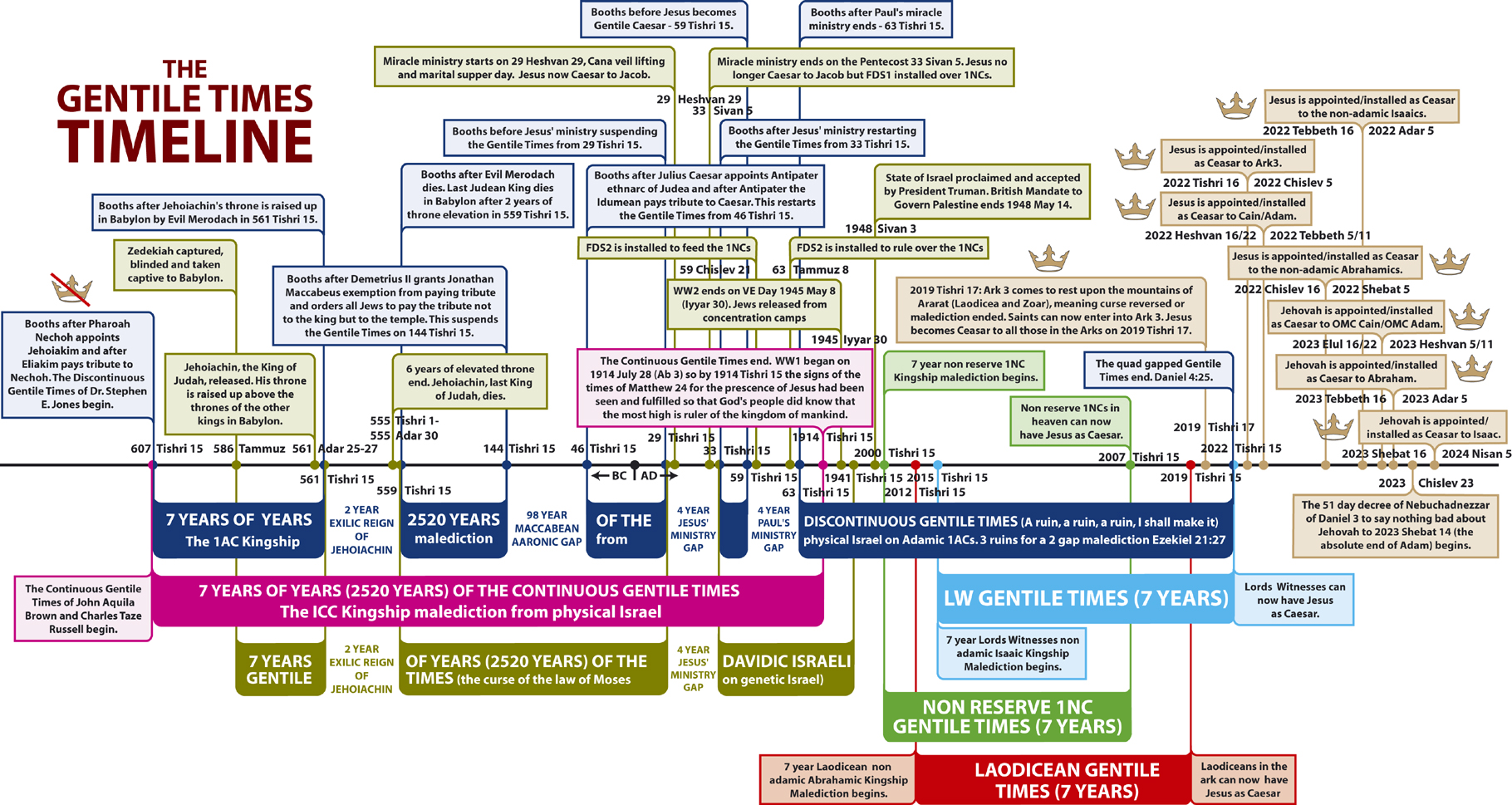 The 3rd Holy Spirit was delayed in implementing the Kingdom of God by the various Gentile Times above. Then the Kingdom of God is appointed/Installed on 2020Shebat16/2021Nisan5 as Caesar over Adam after the expiration of the Dragon's 42 month licence.